Welcome to my new blog post. Today, I’m gonna channel my inner professor and try to explain in simple words how the sea urchin larva nervous system is structured and what is a gene regulatory network. Us, humans when we want to perform a task, e.g. picking up our phone, we go through a subconscious process of data collection and configuration before actually performing it. This requires the synchronized firing of different types of neurons (of the central and peripheral nervous system) in order to control muscle targets. Like us, sea urchin larvae have neurons that allow them to perform less complicated tasks like feeding and swimming. In the following figure you can see a sea urchin larva, which nuclei are stained in blue and its neurons in green. Neurons have been stained using the antibody against the SynB protein that is present in every neuron regardless of the neuronal type. So whatever is blue is a nuclei, and whichever cell is green is a neuronal cell. 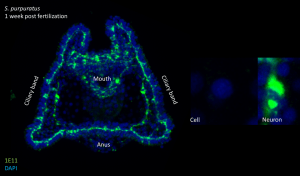 As you can see, the nervous system of the larva at this developmental stage is quite simple, composed of around 50 neurons scattered all around the ciliary band (ciliary band = ciliated cells, whose cilia beat and force the animal to swim) and the digestive system. All those different neurons communicate to each other by projecting axons and forming synapses. The sea urchin nervous system is believed to be compartmentalized into controlling different tasks like food uptake, swimming and response to light.
For a neuron to arise, genes that are saying you are gonna become a neuron must be turned on in progenitor cells and genes that say “no you will become something else” must be turned off.

So now we’ve reached the second part of this blog post, which is gene regulatory networks. Gene Regulatory Networks are schematic representations showing how gene regulation at a cell type and time point is achieved. Gene regulation implies that not all of the genes encoded in the genome are active at all times and in all the cells of the organism. Indeed, one of the things that make a cell type is the subset of genes expressed in those cells at a specific time point. 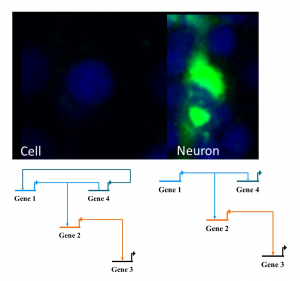 For instance, let’s go back to our example of a random cell and a neuron. That cell and the neuron cannot have exactly the same molecular signature since they have completely different function. That cell expresses let’s say gene 4 which block the expression of neuronal genes (repressor of gene expression) sealing the identity of that cell as non- neuronal. On the other hand, Genes 1, 2 and 3 are expressed in neurons as Gene 4 is being blocked by Gene 1 allowing Genes 2 and 3 to be activated by Gene 1. This is an oversimplified version of a Gene Regulatory Network just to get a grasp of how those interactions occur. Usually those interactions are complicated, a Gene is receiving multiple signals, activating and repressing signals, until some prevail. I’m not gonna go through more detail on this post, but I hope I was able to, at least, explain the basics of the sea urchin nervous system and of gene regulatory networks.